The EMI Awards were given on Thursday, 7 February 2019 in the Audimax – under the theme Cross Reality – Beyond the Surface. Each year, the Media Informatics department at our Universität zu Lübeck honours the most creative and brilliant work produced by a group of students for the first semester event “Introduction to Media Informatics” (EMI). The spotlight was on current technological advances in augmented and virtual reality (AR and VR), which are of major relevance to all segments of our society.

This group created a t-shirt that uses AR to display any logo or motif – which is why they named it Virtual Wear. The students made the assumption that in future AR technology will be a standard in spectacles, making printed logos obsolete in the face of greater individuality possible through markers. Visual triggers are called markers that provide virtual information.

This group focussed on the theme AR in Real Life to look at future applications of AR technologies, with emphasis on architecture. Their idea is to enable use of AR for a walk-through in your own home during the planning stage. They produced an extensive multimedia film based on their idea.

This group developed an operative VR application THEREALITY to test AR technologies in AR, or to make them experiential. The group delved into the total complexity of XR (cross reality). Since two teams each won the second prize, no third prize was awarded this year. However, the best bachelor’s and master’s theses for the Media Informatics programme were also honoured.

Congratulations to all the winners!

In 2018, winners were selected by the content that addressed the topic of Healthcare in the Future
. 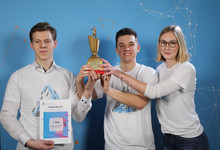 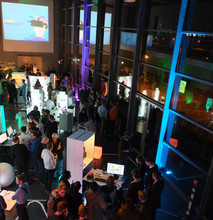