In popular discussions, it is often assumed that testosterone relates to higher aggression. This notion is based on the observation that men have higher testosterone levels and are on average more physically aggressive than women.

However, scientific evidence for this relationship is less clear, and little is known about the role of testosterone in women’s aggressive behavior. Moreover, the impact of this hormone on aggression-related brain regions has only been investigated indirectly and with mixed results.

A new study from the Department of Neurology in cooperation with the Department of Internal Medicine in Lübeck aimed to address these issues. In this investigation, published in Scientific Reports, researchers studied how women’s testosterone level relates to brain reactivity to threat signals during a direct aggressive interaction. Brain activity was measured with functional magnetic resonance imaging (fMRI). Testosterone was quantified from saliva samples, using a highly sensitive protocol developed at the University of Manchester by coauthor Brian Keevil. This protocol permits to pick up even relatively low testosterone level in women.

A challenge in studying the neural basis of aggression is to simulate a realistic aggressive interaction while participants are lying in the fMRI scanner. The group of Ulrike Krämer, who is senior author on the paper, achieved this by developing the Social Threat Aggression Paradigm (STAP). The STAP is a competitive reaction time task in which the opponent displays an angry or neutral face at the beginning of each trial and delivers increasingly loud sound blasts to the participants, successfully provoking them.

Results showed that participants with stronger amygdala reactivity to angry facial expressions got more aggressive towards the opponent. This brain region is involved in the experience of emotional arousal and has previously been associated to aggression. Importantly, women with higher testosterone levels were less aggressive towards their opponent and had reduced amygdala reactivity to the other’s anger expression.

Macià Buades-Rotger, doctoral student of the Department of Neurology and first author of the study, says that the results might be surprising given the general belief that testosterone increases aggression. However, they add up to recent evidence suggesting that testosterone can have a prosocial effect in women. The study indicates that this effect could be linked to lower emotional reactivity. This research, which was funded by the German Science Foundation, demonstrates how hormonal levels affect neural processing of socio-emotional signals and ultimately social behavior.

Brain-behavior and brain-hormone correlations (Picture from the article) 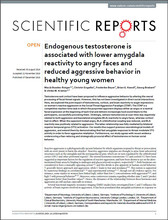