How Noroviruses control their desire for sweets

Newly discovered mechanism in viral envelope: Significant for the development of vaccines and the search for anti-viral substances

The researchers Alvaro Mallagaray and Robert Creutznacher of the group around Thomas Peters (Director of the Institute of Chemistry and Metabolomics) noticed peculiar spectral alterations during their NMR experiments with viral coat proteins. First, these observations were difficult to explain as, so far, no transformations of norovirus coat proteins had been detected in Lübeck or other laboratories worldwide. The unexpected observation was only possible since in recent years the Lübeck researchers had succeeded in labeling norovirus coat proteins with non-radioactive isotopes in such a way that the NMR spectroscopic fingerprints of these proteins could be decoded almost completely. With these fingerprints in hand, it is now possible to gain deep insights into the attachment of norovirus coat proteins to sugar structures on the surface of host cells or bacteria, present in the gut microbiota. The attachment of Noroviruses to distinctive sugar chains, the so called histo blood group antiens (HBGAs), is considered as essential for successful infection and, therefore, is target of a number of studies, aiming at the development of antiviral agents specifically blocking the interaction between virus and host. The cause of the observed spectral alterations emerged as a surprise from elaborate three-dimensional NMR experiments, so called HN(CO)CACB NMR experiments, when deciphering the protein fingerprints. The data indicated that an amino acid residue adjoining the sugar binding site undergoes a relatively rapid spontaneous transformation, effectively suppressing sugar binding. Such so called post translational modifications are known but so far had not been associated with interactions of viral coat proteins with host cell factors or receptors. The results from the Lübeck laboratory were confirmed by other groups as part of a collaboration within the DFG (Deutsche Forschungsgemeinsachft) funded research unit ViroCarb. The group of Charlotte Uetrecht from the Pette Institute in Hamburg delivered supporting evidence from mass spectrometry, and the group of Bärbel Blaum at the University of Tübingen contributed structural details of the altered sugar binding from crystallography experiments. Analysis of gene sequences of Norovirus strains involved in currently prevalent epidemies shows that ca. 60% of all viruses have the potential to undergo this spontaneous post translational modification, modulating their interactions with host cells or bacteria. To date, it is not known if and how noroviruses benefit from this transformation, but unquestionably this discovery will impact the search for novel antivirals and the development of vaccines. 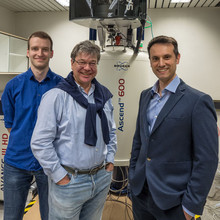