Open Lab for Robotics and Imaging in Industry and Medicine

An Open Lab for Robotics and Imaging in Industry and Medicine (OLRIM) has been established at the University of Lübeck’s Institute for Robotics and Cognitive Systems and Institute of Medical Engineering. Notification of funding of almost 270,000 euros – a sum that will be matched by the university – was given by the Minister for Economics and Technology, Dr. Bernd Buchholz, on Thursday 2 May 2019. The project, initiated by Prof. Floris Ernst, was selected from among many other applicants.

As the Minister told the President, Prof. Gillessen-Kaesbach, at the official announcement of funding, the central idea behind the Open Lab is to make the specialist knowledge and existing facilities of the participant institutes available to other research institutions and companies from the region. “This strengthens technology transfer not only in the region, but in the entire state,” said Buchholz. The OLRIM will also function as an interface for the research and development plans of various research institutions in the area of robotics and imaging in industry and medicine, and/or of economic partners. It also aims to offer a platform for technology transfer and services. Gillessen-Kaesbach says that, “In this way, the institutes set out to make their potential as part of the university’s research focus on biomedical engineering available to external organisations and students.”

According to Buchholz, the project will above all strengthen the federal state’s practical research infrastructure. The main idea is to greatly strengthen knowledge and technology transfer between science, business, and society in accordance with the federal state’s regional innovation strategy, and to create a favourable environment for entrepreneurship. "In the future, with this laboratory, the technical staff will be available to successfully carry out projects, including those of a short duration. Interested companies will also be able to use the hardware on a loan basis for feasibility studies and to test the equipment,” said Prof. Thorsten M. Buzug, Director of the Institute of Medical Engineering.

With 1.4 percent of its gross domestic product (2011) invested in research, Schleswig-Holstein falls well short of the European target of three percent. “The universities should be even more committed to fulfilling their task as a driving force for innovation in Schleswig-Holstein, and actively support knowledge and technology transfer in business, particularly with regard to SMEs, which are often unable to afford their own R&D departments. OLRIM sets a positive example,” said Buchholz.

Funding for the project amounts to a total of 536,907 euros, with half being contributed by the participating institutes and half by the state of Schleswig-Holstein. The initiative was chosen in spring 2017 by a jury of representatives from the Ministries for Economic Affairs, Science and Energy as part of the tender “Development of Research Infrastructure in Schleswig-Holstein in the Framework of the Federal State Economics Programme” (FIT Call 2017).

From 2014–2020, the Federal State Economics Programme pools funding from the EU’s European Regional Development Fund (ERDF), the Joint Federal Government/State Government Task for the Improvement of Regional Economic Structures (GRW), as well as federal state funds for economic and regional funding in Schleswig-Holstein. 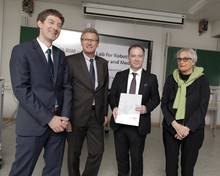