The University of Lübeck is making its new research information system available to users. University President Prof. Dr. Gabriele Gillessen-Kaesbach and the Executive Board representative for the project, Prof. Dr. Werner Solbach, introduced the new system to the university at a kick-off event on 15 May. Its name was also revealed at the event: FILU – short for “Forschungs-Informationssystem der Lübecker Universität” (“Research Information System of the University of Lübeck”).

FILU brings together all information relating to research at the university. It forms the database for questions and information relating to the scientists at the university and the University Medical Center, Campus Lübeck, to their scientific publications and research projects, their participation in research groups, the research areas and scientific disciplines that they specialise in, as well as national and international research collaborations, and involvement in expert scientific associations. The scientists who make their data available to the system are able to choose precisely what data they want others to be able to access. Compliance with data protection is central to the development and management of the system.

“The research information system is designed, above all, to make the exchange of research data easier,” said Prof. Gillessen-Kaesbach. “It will simplify and intensify both collaboration among scientists within the university and the global dissemination of information.” It will also make it easy to retrieve and compile information that the university is obliged to make available to political and administrative bodies for statistical purposes.

FILU will make general information relating to research at the university available via a publicly accessible interface, which will be ready during the upcoming semester. Scientists are requested to edit and complete their research profile in the system as of now.

The system is set up in accordance with the recommendations of Germany’s most important scientific advisory body, the German Council of Science and Humanities, regarding core data on research from 2013 and 2016. In particular, the German Council of Science and Humanities issued guidelines for standardised data formatting so that the exchange of data in accordance with the approval granted by individuals is also possible across systems. On 13 and 14 May in Bonn, the German Research Foundation held the first conference on National Research Data Infrastructure (NFDI), which is working towards the same objectives on a national level as FILU is on the local level.

“Overall, the research data systems will lead to greater transparency and visibility with regard to research. In this way, they also help to better inform citizens, whose taxes are largely responsible for the public funding of research, and support the open access approach to research data on the internet,” said Prof. Dr. Werner Solbach. The FILU system at the University of Lübeck will also provide the data that was previously available in printed form in the university’s research report. 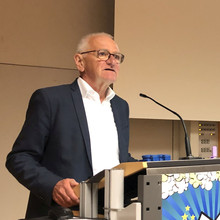 Executive Board representative Prof. Werner Solbach introduced the research information system (Photo: Julia Figge / University of Lübeck). From the presentation on the structure of FILU (Image: Staff Function for Research)