Ceremonial opening of the Center of Brain, Behavior and Metabolism (CBBM) of the University of Lübeck

Pioneering scientific building for the subject of “Brain, Hormones, and Behavior” – opening ceremony with prominent personalities from the worlds of politics, science and research

February 26, 2016 marks the opening of the new state-of-the-art research building for the Center of Brain, Behavior and Metabolism (CBBM) at the University of Lübeck. In the future, 300 scientists and doctoral students from 18 nations will carry out research into this interdisciplinary, internationally networked topic in this new building. In 33 working groups, medical scientists, biologists, psychologists, food scientists, pharmacologists and physicists, for example, will work on interrelations between sleep, hormones, eating behavior and obesity. The research building, jointly financed by the federal and state government for 38.3 million euros, was made possible based on the recommendation of the German Science and Humanities Council in 2010.

On the occasion of the opening of the CBBM, Professor Hendrik Lehnert, president of the University of Lübeck, said: “It is a great feeling for me to stand in the completed CBBM. The architecture is beautiful – it is very bright, very open, and very transparent. I am delighted to be able to work alongside so many exceptional colleagues from the widest range of disciplines and countries, all under one roof. For the university, this is a further significant milestone on the way towards a modern life sciences campus for the 21st century.”

Amongst others, Professor Lehnert welcomed the state of Schleswig-Holstein’s minister for social services, health, science and equal opportunity, Kristin Alheit, to the inaugural event. In her welcome speech, the state minister said: “I can only congratulate the University of Lübeck on the new center from the bottom of my heart. The focus here is on inter-disciplinary teamwork. Not least because, as the minister for research and health, I am very interested in insights into the basis of widespread diseases such as sleep disorder, high blood pressure, depression, diabetes and obesity. I am certain: CBBM will make an important contribution to this.”

The president of the Scientific Building Committee, Professor Simone Fulda, the Frankfurt-based tumor researcher speaking on behalf of the German Science and Humanities Council, the most important science policy advisory body in Germany said:  “The research center fills the gap in clinical research in Germany. Its widely varied teams of specialists are a good guarantee that this productive institution will continue in the future to yield internationally and nationally acclaimed outcomes in the area of the neurobiological principles of energy metabolism.

Professor Katja Becker presented the welcome speech on behalf of the German Research Foundation (DFG). She said: “We know from innovation research that surprising, truly groundbreaking – and thus also innovative – ideas often arise in places where researchers from a range of different disciplines are able to meet and strike up an informal discussion on a day-to-day basis. CBBM already stands for brave and risk-minded research at the interface of knowledge and applications –research that pushes all the limits in the very best and most positive sense. And now, more than ever, it will continue to do so in the future.”

The president of the Leibniz Association, Professor Matthias Kleiner, said: “The principle of ‘cooperative science’, which was also the driving force behind the emergence of the CBBM, promotes the development and exploration of new knowledge, especially at the junction of established scientific fields and foundations. This is pursued within many Leibniz institutes as well as in the same spirt beyond the dimensions of the Leibniz research associations.

The mayor of the Hanseatic City of Lübeck, Bernd Saxe, and the chairman of the UKSH, the Schleswig-Holstein university hospital, Professor Jens Scholz, also made welcoming speeches at the inauguration. The ceremonial address on the subject of “Is the human spirit unique?” was given by the behavioral biologist, Professor Gerhard Roth, the director of the Brain Research Institute at the University of Bremen. The opening also concluded the CBBM symposium “Energy Metabolism between Reward and Revenge” on the question of energy metabolism between the mechanism of effect of reward and revenge.

The CBBM’s new research building comprises 5,400 square meters of main floor space spread over four stories. The building, designed by the Stuttgart architectural company, hammeskrause, which is specialized in scientific buildings, is characterized by its clear, light-flooded design and high functionality to meet the interests of the researchers. Two roofed atriums on two stories ensure that also the laboratories situated in the interior are generously provided with daylight. The total surface area of the exterior glass is 2,800 square meters. Carbon-neutral heating with a cogeneration unit run on biogas inside the building provides heating. The cost of construction, financed by the federal and state governments, was 0.91 million euros, the initial fittings and furnishings costs excluding large equipment add up to 4.22 million euros. Construction began in March 2012.

Construction was carried out by GMSH (Gebäudemanagement Schleswig-Holstein), whose managing director, Hans-Adolf Bilzhause, presented the key to the president of the university at the conclusion of the ceremonial event. Bilzhause said: “We utilized the tight building area to full capacity to construct here a new building with high functionali-ty and the greatest possible transparency. The result is a state-of-the-art interdisciplinary center with multidisciplinary research opportunities, from which science and research can benefit and that will light the way to the future for Schleswig-Holstein. We are building the center for biomedical research right next door. And already this year we will also begin construction of a new radionuclide laboratory. These three large new buildings will also completely transform the urban landscape of the University of Lübeck.

The research groups working together in the CBBM, originated from a total of nine university institutes and clinics and the Schleswig-Holstein university hospital.  Their international research includes 93 collaborations in more than 20 cities worldwide, including the University of California, Stanford University, Yale University, Harvard Medical School, Universidad de Chile, University of Cambridge, the Karolinska Institutet in Stockholm, the National Research Centre in Cairo, the University of Santo Tomas in Milan and the Westmead Clinical School in Sydney.

As a part of the German Research Foundation (DFG), the CBBM research groups are participating in the special research areas of / Transregio 134 (Ingestive Behavior: Homeostasis and Reward”) and 654 (Plasticity and Sleep) as well as the Research Training Group 1957 (Adipocyte - Brain - Crosstalk). At the European level, they are collaborating with the Marie Curie Initial Training Network “nEUROinflammation” and the seventh framework program for research, “Disorders of sexual development”, as well as the German Center for Diabetes Research (DZD). The projects are supported by two Heisenberg professorships from the German Research Foundation and one Lichtenburg professorships from the Volkswagen Foundation.

As technology platforms for research, the CBBM has at its disposal a 3-tesla magnetic resonance imaging device for neuronal imaging, a metabolic core unit for dual-energy X-ray absorptiometry, whole-body air displacement plethysmography and indirect calorimetry as well as a bioanalytical core facility for metabolomics and mass spectrometry and for the analysis of hormones. 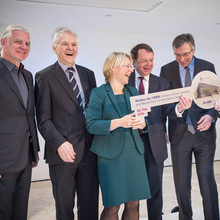 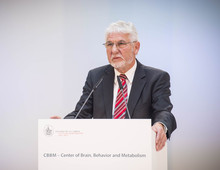