Maria Matthis, in the 11th class at the Katharineum zu Lübeck, and eleven other pupils from across Germany won the first prize at this year’s national mathematics contest. The final round was held in early February in the Hessian Hofgeismar. Awards will be handed out on 28 March in Cologne.

The national mathematics contest is sponsored by the Education & Talent Association, sponsored by the Federal Ministry for Education and Research, the Association of Sponsors for the Promotion of Science in Germany, and the Ministry of Culture. Held during the school year, the contest involves two rounds of assignments, followed by a third round, a colloquium.

For each of the assignment rounds, the pupils have to solve four math problems in algebra, geometry, combinatorics and the theory of numbers. The winners of these rounds move up to the final – a colloquium – where they discuss technical aspects with experienced mathematicians. A group of judges then selects winners based on these discussions. A total of 1,300 pupils from around the country took part in this school year, of which 49 qualified for the final round.

As the national champion, Maria Matthis, will become a member of the German Educational Foundation. For this, she will receive a stipend to study at a university of her choice. She topped off this great achievement by also qualifying for this year’s European Girls’ Mathematical Olympiad, slated for April in Kiev (Ukraine). She and three other girls will represent Germany in Kiev.

Math is fun and makes sense

Maria has been participating in the math club of the Institute for Mathematics since the 3rd class. This course for school pupils in the 3rd to 12th classes is a part of the
Lübeck Mathematics Initiative (LIMα)
, under the Academy of Pupils at the Universität zu Lübeck (SaLü), which generous funding from the Possehl Foundation.

In the 9th class, Maria completed a pupil training programme at the Institute of Mathematics, where she also studied folding of hyperbolic surfaces. Since then, she also attends a weekly intensive training session taught by Asst. Prof. Dr Christian Bey at the same institute. For the 10th class, she went to Tallinn (Estonia), as part of her grammar school study-abroad programme to gain a host of new experiences.

Maria also participates actively in the “Youths learn maths” programme, which is also sponsored by the Education & Talent Association. This starts in the 7th class, with the lower classes working out four correspondence sessions and the upper ones meeting biannually for four-day seminars.

Although Maria accepts all this help and support with enthusiasm, it is nevertheless not enough for one to win the national mathematics championship. One must do more – through self-study and doings maths intensively as one’s hobby. And that too not just to win, but simply because it is fun and makes absolute sense.

Success in sponsoring early career scientists of the future

Maria had already demonstrated her mathematical talent and commitment in the past: in the last three rounds of the National Mathematics Olympics, she got the first prize once and the third prize twice. This competition, also sponsored by the Education & Talent Association, comprises four parts: in part two onwards, one has to solve math problems similar to those in the national contest, but in a test within a fixed time frame, rather than at home.

The highlight of this programme is that each year a new venue is chosen for the final round called the “German Olympiad.” This year, it will be in May in Chemnitz, for which Maria has to pass the third round again, the state championship in Schleswig-Holstein. This round is slated for 22–23 February in Flensburg. We wish Maria the best of luck!

Success stories like that of Maria underpin and encourage the Lübeck Mathematics Initiative and others by the Academy of Pupils, to stay committed to sponsoring up-and-coming scientists of this country. 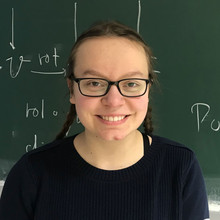