Mark your calendar for 8 pm on Saturday, 2 February, to listen to our Universität zu Lübeck orchestra perform the major semester-end concert in the Colosseum. The ensemble will also give a guest performance on Friday, 1 February in the Mölln Augustinum.

Under the direction of Fausto Fungaroli, the orchestra will commence with Beethoven’s Coriolan Overture, composed in 1807 in the enigmatic and sombre key C minor. The young musicians will follow up by accompanying two soloists during Mozart’s Synfonia Concertante in the parallel key E-flat major. Mozart composed this piece at the age of 23 for a violin, played by Mariko Miwa, and for viola, played by Pauline Renk. Miwa won the International Chamber Music Competition in Salzburg, while Renk has received numerous awards and is studying for her master’s at the Lübeck Academy of Music.

The orchestra will conclude with Ludwig van Beethoven’s Symphony No. 5, also in C minor. This piece is often referred to as the fate symphony and offers much more than the best-known motif in the history of music found in all four of its movements. 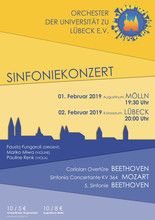