Researchers from the Institute of Biomedical Optics have developed a new technique for functional stimulated Raman imaging.

Modern optical microscopy explores the frontiers of biomedical imaging. The Nobel prize in chemistry in 2014 was awarded for the development of super-resolution microscopy, which breaks the barriers of the diffraction limit. Besides only resolving structure, there is also the demand to identify the imaged molecules. This can be achieved by employing optical fluorescence markers, however, these are often not approved for in vivo use in humans. Hence, for early stage detection of disease, a medical imaging system with endogenous molecular contrast is desired.

In principle, this can be achieved by modern Raman microscopes. The underlying Raman effect is an inelastical scattering mechanism, that allows to identify  species, quantity and chemical composition of a sample. A problem of this traditional „spontaneous“ Raman microscopy is the low signal level, which requires long recording times of up to several hours. This problem can be overcome by non-linear Raman microscopes, which, up to now, had numerous other limitations and drawbacks.

A fundamentally new system for stimulated Raman microscopy was now developed by Sebastian Karpf et al. from the group of Prof. Robert Huber Institute of Biomedical Optics. The newly developed fiber-based lasers enable a more flexible and broader application than conventional short-pulse lasers. This is a major step towards a future application in humans, where the low penetration depth of light requires the use of optical endoscopes.

The future goal of this research project is the development of a multi-modal endoscope for molecular imaging in vivo in patients in order to improve early stage diagnosis of various types of diseases.

The results of Karpf et al. have recently been published in the multi-disciplinary journal Nature Communications. DOI: dx.doi.org/10.1038/ncomms7784

The research was conducted in the framework of the ERC Starting Grant „FDML-Raman“of Robert Huber from the institute of biomedical optics at the university of Lübeck (Project start 2010). 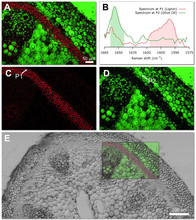 Hyperspectral TICO-Raman images of a slice of Geranium phaeum stem in olive oil. (a) Image with molecular colour code with lignin in red and olive oil in green. (b) Spectra at two pixels P1 and P2 and integration intervals used for colour coding (see also Supplementary Fig. 6). (c,d) High signal-to-noise images of the two-colour channels. (e) Morphological overlay of the molecular contrast image from the probe laser with the high-definition transmission microscopy image from the pump laser of the same setup.